I’m having to create a sort of “educational autobiography” for the class I am helping teach this fall. I’ll post the slideshow presentation I’ve been working on to go with it sometime soon. I bring it up because I’ve been thinking about several of the moments from my political education when I might have come away more conscious– more “woke,” in the naive sense– or “radicalized,” as Atlantic contributor Derecka Purnell put it in a recent discussion hosted by Haymarket Books. I have had a few of these moments. Certainly, over a decade living outside the U.S. as a white, cis-male, English-speaker from a middle-class Protestant background has been eye-opening.

Before moving to Hiroshima, Japan in 2008, at the age of 24, I had only left the southeastern U.S. a handful of times. The first time was a month-long stay in Australia accompanying my father, who was a software engineer. The second and third were Caribbean cruises with my high school band and my family. The fourth was my junior year at Duke University with the student Christian congregation I was active with there. A group of us went on a 10-day “study pilgrimage” to Jerusalem, Israel, and parts of the West Bank including Bethlehem. We read scriptures of the Abrahamic faiths, including Gnostic books, and other historical texts that would shed light on the pre-Biblical and indigenous cultures of the so-called “Holy Lands” of Israel and Palestine: the West Bank and Gaza. We also read United Nations pamphlets and and informational booklets distributed by Amnesty International about the political history and ongoing humanitarian crisis in the region. But nothing could prepare me for what we would see in East Jerusalem– 30-foot concrete barriers sprayed with “Bush built this wall!”– a reference to then-President George W. Bush’s support for the barrier variously referred to as, “Apartheid Wall,” or “Security Fence” on TV (depending on your news source).

I was there in the days before the election of Mahmoud Abbas as President of Palestine in the wake of Yasser Arafat’s death in 2004. On two memorable occasions I witnessed Israeli Military harassing civilians in East Jerusalem. One old woman, wearing a head covering and carrying a grocery bag was chased down a hill away from a section of the concrete wall that had been built down the center of the road in front of a small convenience store in a suburb. On another occasion, near an entrance to the Old City, a handful of armed Israeli soldiers passed through the crowded market street brandishing their assault rifles and shouting for people to get out of the way. I was obviously witnessing a kind of bullying. But this was not the schoolyard. These bullies had the full force of two of the world’s most brutal imperial armies to back them up.

Near the end of our “study pilgrimage,” my fellow pilgrim-students and I had the opportunity to stay with a group of Bedouin people in the Negev desert. The Bedouin are a nomadic indigenous group who are among the lesser-known victims of American-Israeli policies in the region, as their camel- and goat-herding lands are further and further reduced, polluted by, among other sources, nuclear waste from the Dimona nuclear reactor and the Negev Nuclear Research Center.

I remember very vividly the troubled night’s sleep I got in that tent out in the desert. The midnight walkabout. The perfect darkness of the land illuminated only by starlight. These people, our hosts were not Muslims, nor Christians, nor Jews, but had a complex of beliefs and traditions all their own. Yet they were drawn in to the cycles of suffering produced by Israel’s policies just as deeply and consequentially as their Muslim and Christian and Jewish brothers and sisters. They represented to me the margin of the margin of the margin of society.

I was having a crisis of faith because I felt that Christianity in the forms I was used to it being practiced, simply offered no answer for the Bedouin or the Palestinians I was meeting and interacting with; there was only a desert purgatory, no state, no rights, just poor landless people brushed to the side again and again. I think I saw my religion then more truly than I had to that point, as an instrument of the pain and oppression that I had ostensibly come on this pilgrimage to learn how to begin to eliminate in the first place! WTF!?

I don’t remember the exact timing– It may well have been the very next day– when one of our group leaders leaned over to me and said in a hushed tone at breakfast, “That guy over there is Mordecai Vanunu, the Dimona whistle blower!” I had no idea who Vanunu was at the time. I humored my group leader who seemed kind of starstruck, and followed her over to chat with my breakfast tray. Vanunu, a political prisoner, I later learned, for leaking proof of Israel’s nuclear weapons program, had just finished serving the last year of his original 18-year prison sentence, but had essentially been placed under a kind of house-arrest on the campus of St. George’s College, where I was staying with my group from Duke.

He was a quiet man, an Israeli convert to Christianity, who seemed desperate to escape Israel and go to work at a university somewhere– “maybe M.I.T.,” I remember Vanunu offering. But Vanunu remains in Israel, a prisoner of conscience, as identified by Amnesty International, denied even the use of a computer or mobile phone since 2015, according to wikipedia.org.

Vanunu was and is a symbol for me of a powerful and powerfully human revolutionary praxis, one which does not rely on religious fervor alone for fuel and inspiration, but which is equally sourced in empirical knowledge of the grave dangers and environmental impacts posed by even the so-called, “peaceful,” nuclear programs like Israel’s. And Vanunu has more or less stoically endured his harassment, imprisonment, and torture, including a brutal 11-year stint in solitary confinement!

Martyr is a highly politically charged word these days with religious extremists of all stripes dominating the mainstream narratives of history unfolding in the Middle East. Indeed, as a student of these issues, and an official graduate of my own “study pilgrimage” I have often avoided such words as means of avoiding miscommunication or deepening felt division. Righteous and peaceful as his actions were, Vanunu must have imagined the consequences he would face; and yet he acted. I see Vanunu’s bravery and conviction, matched daily by comrades in prison around the globe, those prisoners of conscience who are denied their right to free speech, to free movement, and to associate freely with whomever they choose, as equivalent to those of the martyrs and chivalrous knights and crusaders who populated my moral imagination from such a young age.

Mordechai Vanunu is nothing if not a powerful symbol of the consequences of empire run amok: American and Zionist Israeli empire in all its brute force. His story is a painful reminder of the injustice of prison as an institution, and states’ use of violence to silence dissent. When our paths crossed in early 2005 at St. George’s College in Jerusalem, it seemed like a coincidence. But the ensuing fifteen years have shown how central social justice activism, especially nuclear non-proliferation, would become in my personal consciousness and in my professional life as a teacher.

I have only just recently made my way back to the Imperial Core, the United States, after twelve years abroad in Japan and Canada, and this first experience of radicalization, the beginning of my grasp of the problem at the root, as Professor Angela Davis has it, of the cruel habit of Empire: Capitalism.

Great piece in the Boston Review by a veteran of Israel’s “Defense Forces.” 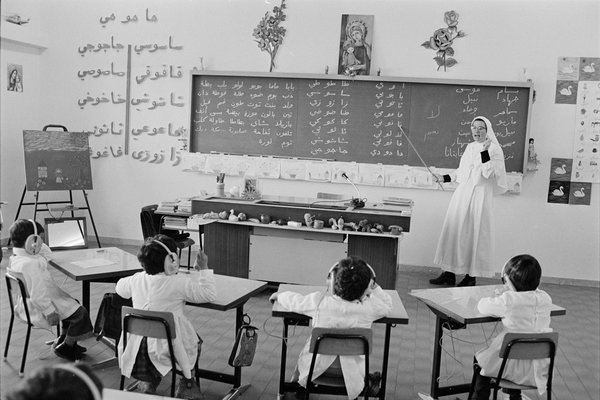 Interesting article in the NYTimes today.

Plenty of hypocrisy from the Likud party.  It’s shocking that the Israeli Occupation of Palestine is allowed to be swept under the rug while these surface-level flare-ups among children are treated as “the real problem.

The quotation from the Parliament Member Rivlin on page 2 is particularly telling:

This evil comes from insufficient education… Unfortunately, more and more youth think that hate and racial violence are permissible.

Hmm… wonder why that is.  Could it be the hate and racial violence perpetrated by your own government???  Schools run by the state are just one piece of the puzzle– they are certainly implicated in the maintenance of such a deeply broken system of racism and violence, but the schools are not the ultimate source.  The Likud Party here stands only to distract people from the much grosser crimes being perpetrated in the name of “National Security.”

Hamas is beginning to look more and more legitimate as a governing party for Palestine.  I wonder if/ when Palestine’s protests of it’s armed occupation by Israel will be recognized as the next chapter in the continuing “Arab Spring.”

Honestly, to see Hamas leaders supporting peaceful popular protests in the middle east is some of the most hopeful bits of news I’ve seen in a long time.