Cartoonist Garry Trudeau has been writing about Trump and a possible run for the presidency for nearly 30 years, prompting Trump to call him “a third-rate talent,” “a sleazeball,” “a jerk” and “a total loser.” Trudeau is the creator of the popular comic strip “Doonesbury” and the first cartoonist to win the Pulitzer Prize. In September 1987, Trudeau published a series of comic strips that now seem prophetic. In one strip, reporters ask Trump a series of questions about his political ambitions to run for Congress, and Trump responds, “President, think president.” Trump has remained a frequent character in “Doonesbury” ever since, giving Trudeau a chance to make fun of everything from Trump’s hair to his ego to his rampant use of insults. His cartoons have just been collected in a new book titled “Yuge!: 30 Years of Doonesbury on Trump.”

This is the first time I’ve seen a political cartoon with a vagina in it.  It is also the first cartoon I’ve seen with a caricature of my mother in it.  I think the artist captured mommy’s sternly disapproving, concerned face very well. 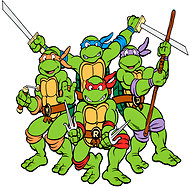 Nice, if nostalgic history of a franchise.  As well as an interesting etymological note on “booyakasha,” which is the turtles’ new catchphrase, apparently.